I wonder if my father is feeling a sense of deja vue as he watches Americans rise up and demand an end to police brutality and racial injustice, I thought, as I watched part of George Floyd’s funeral.


In the 1960’s my father was freedom rider. He left NYU on a bus with fellow students and traveled through the segregated South; that’s same region of the country he grew up in and fled at the age of 14 for a better life. When my father went back during college, he was hell bent on changing the lives of black people. He marched for freedom, registered voters and demanded an end to segregation. He faced violence and verbally harassment. He then chronicled his experiences in magazine so others could remember and learn from it. Despite the gains achieved, more than 52 years later the fight for equality and survival continues.


The glorious part is that pioneers like my father still exist, I thought as I woke up on his birthday. He shared his passion for social justice, community service, education and commitment to family with his children. He also taught us to remove or work around the barriers erected to hold us back based on our race, gender, disability or chronic illness. For these values, lessons and do much more I’m grateful.


Martin Luther King Jr. once said, “The quality, not the longevity, of one’s life is what is important.” Thankfully, my father continues living both a long and valuable life. It’s a life that’s an example of how to change the world for the better and love deeply. 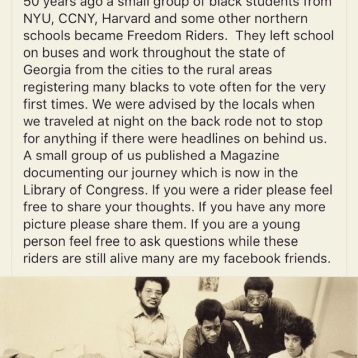